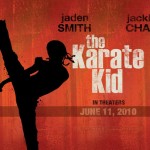 Some people are really excited by them, but I personally cannot stand all these remakes of our favourite 80s movies and TV shows. Why can’t the studios leave them well alone?!

I must admit, the trailer for the new Karate Kid movie looks better than I was expecting but I still feel it cheapens the original. That being said, The Next Karate Kid with Hillary Swank had already achieved that somewhat!

Just because these classics have stood the test of time does not mean people want to see them rebooted for a new generation. Come up with new fresh films for the kids and young adults of today, don’t ruin ours because it’s the easy option.

From memory, I cannot think of a single 80s remake that has bettered the original. Miami Vice was very disappointing and Friday The 13th was a joke. It’s not just the remakes that are a bad idea, unnecessary sequels are also generally very poor. I won’t even get started on Indiana Jones and Star Wars.

In addition to The Karate Kid and The A-Team, the upcoming list of 80s movies being remade reads as follows;

Unless there are some massive changes to the premise of these movies, I can’t see how they can work in 2010. If they are going to be changed to that extent, surely it makes more sense to just create a brand new picture rather than live off the back of the name of an 80s classic.

Hopefully the studios will get bored of this trend sooner rather than later and we can forget these awful remakes ever happened!

This site uses Akismet to reduce spam. Learn how your comment data is processed.